The Moroccan novelist Youssef Fadel was shortlisted for the International Prize for Arabic Fiction in 2014 for his novel A Rare Blue Bird Flies with Me, a masterful history of love, loss, and modern Morocco, in which he describes the gruesome life in prison during the failed coup against King Hassan II in 1972.

Fadel was himself imprisoned in the notorious Moulay Cherif prison (1974-75) during Morocco’s ‘Years of Lead.’

Read the interview with Youssef Fadel 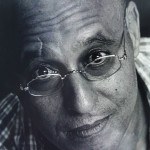