Addressing the tragedy of the present-day Middle East

From a Syrian novel about Islamic State’s occupation of Raqqa to an Egyptian dystopian thriller, six books that “address the tragedy of the present-day Middle East” have been shortlisted for the International prize for Arabic fiction. 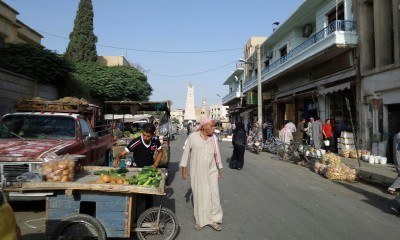 This year, Syrian writer Shahla Ujayli makes the shortlist for A Sky Close to Our House, in which a Syrian woman looks back on her country’s past from her exile in Amman in Jordan, after Isis occupies her hometown of Raqqa.

“These have had a negative effect on Arabic life in general, with the rise in violence, terrorism, poverty and deprivation, and I was affected by all that on a personal level. My house in the city of Raqqa seemed suddenly very distant, since visiting it was all but impossible because of the war, and political and ethnic conflict. I wanted to bring that place back to life, by describing what was happening in the world and the history of the Middle East through its most significant events, offering a fictional vision of the relationships between ordinary individuals.”

Two Palestinian writers are shortlisted for this year’s prize. Rabai al-Madhoun was picked for Destinies, a novel written in four parts looking at the Palestinian exodus from Israel in 1948, the holocaust, and the Palestinian right to return, and Mahmoud Shukair for Praise for the Women of the Family, a history of the Al-Abd al-Lat clan’s women, after they leave the desert and its Bedouin customs behind.