“A sad but beautiful book” 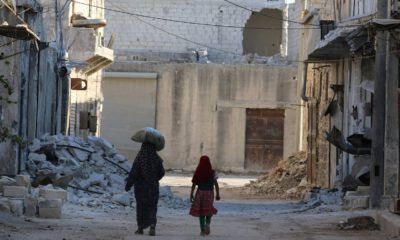 Aleppo becomes a central character in this sad, beautiful portrait of a family
psychologically scarred by war and tyranny.

Were Syrians wise to revolt? Aren’t they worse off now? Such questions
misapprehend the situation. Syrians didn’t decide out of the blue to destroy
a properly functioning state. The state had been destroying them, and itself,
for decades. In No Knives in the Kitchens of This City, Khaled Khalifa, poet,
screenwriter and Syria’s most celebrated contemporary novelist, chronicles
this long political,social and cultural collapse, the “incubator of
contemporary demons”.

The story stretches back to the first world war and forward to the American
occupation of Iraq, but our narrator’s “ill-omened birth” coincides with the
1963 Ba’athist coup. The regime starts off as it means to continue. The maternity
hospital is looted and emptied of patients. The schools and universities are
purged; only pistol-toting loyalist professors survive. Public and individual
horizons shrink as the president’s powers grow through emergency law,
exceptional courts and three-hour news broadcasts covering “sacred
directives made to governors and ministers”.

The novel follows a large, well-drawn cast – a family, their friends, enemies
and lovers – back and forth across three generations. This multiple focus and
enormous scope turns the setting, Aleppo, into the novel’s central character.
“Cities die just like people,” Khalifa writes. So ancient neighbourhoods are
demolished and fields give way to spreading slums.

No Knives in the Kitchens of This City won the Naguib Mahfouz medal for literature.
As in many of Mahfouz’s novels, Khalifa’s urban environment develops a power
somewhere between metaphor and symbol: “The alley was witness to the
destruction of my mother’s dreams, and the idea of this alley grew to encompass
the length and breadth of the country.”

Click here to read the complete book review of No Knives in the Kitchens of This City.
It first appeared in The Guardian on 24 September 2016.

Posted on 25/09/2016 in FICTION Historical, FICTION Literary, FICTION Political, tagged as fiction, Hoopoe, Khaled Khalifa, No Knives in the Kitchen of This City, novel, Syrian