In its recent article about Hoopoe, The Caravan talks to Hoopoe marketing manager
Basma El-Manialawi and some Hoopoe readers. 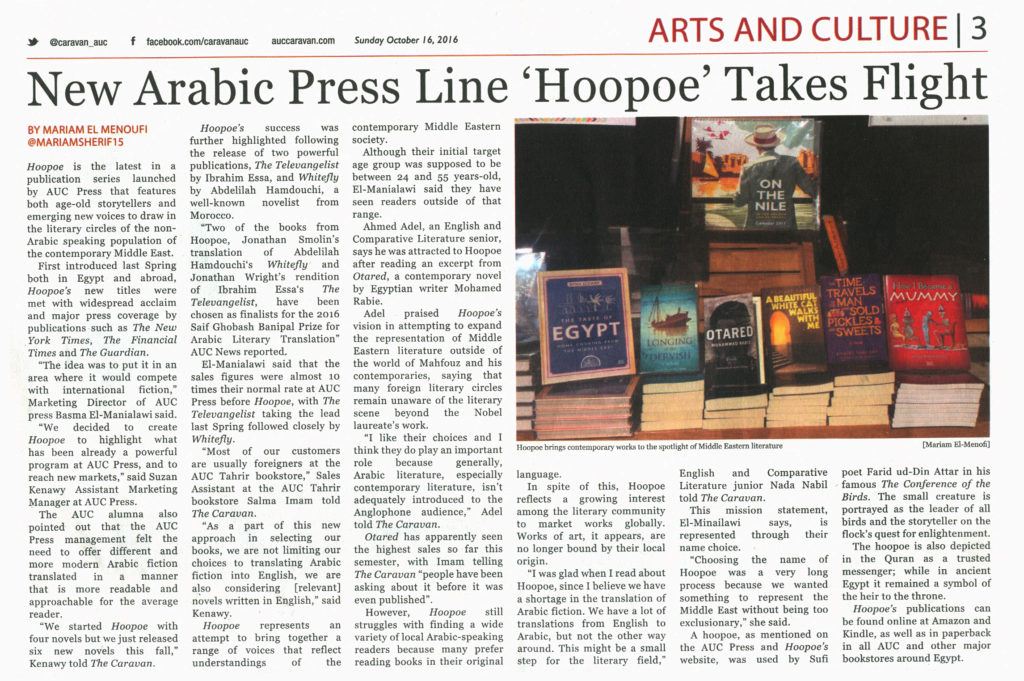 Here are some extracts:

Hoopoe is the latest in the publication series launched by AUC Press that features
both age-old storytellers and emerging new voices to draw in the literary circles of
the non-Arabic speaking population of the contemporary Middle East.

“The idea was to put Hoopoe in an area where it would compete
with international fiction,” Hoopoe marketing manager
Basma El-Manialawi said.

Hoopoe represents an attempt to bring together an range of voices that reflect
understandings of the contemporary Middle East society.

Ahmed Adel, an English and comparative literature senior at AUC, says that he
was attracted to Hoopoe after reading an excerpt from Otared,  a contemporary
novel by Egyptian writer Mohamed Rabie.

Adel praised Hoopoe‘s vision in attempting to expand the representation of Middle
Eastern literature outside of the world of Naguib Mahfouz and his contemporaries,
saying that many foreign literary circles remain unaware of the literary scene
beyond the Nobel laureate’s work.

“I like their choices and I think they do play an important role
because generally Arabic literature, especially contemporary
literature, isn’t adequately introduced to the Anglophone audience,”
Adel told The Caravan.

“I was glad when I read about Hoopoe, since I believe we have a shortage in the
translation of Arabic fiction. We have a lot of translations from English to Arabic,
but not the other way around. This might be a small step for the literary field.,”
English and comparative literature junior at AUC Nadia Nabil told The Caravan.