And the winner of the 2018 ArabLit Story Prize is….

Earlier this year, ArabLit launched a short-story contest, officially calling it “the arablit story prize.”  Eligible entries are short-stories under 1500 words, translated from Arabic into English. “The 2018 submissions—which were read blind, without knowledge of the identity of either author or translator—came from authors and translators in Egypt, Lebanon, Jordan, Bahrain, Iraq, Germany, Palestine, Saudi, France, the US, and England,” explained ArabLit.

In September, they announced the shortlist for the 2018 ArabLit Story Prize: 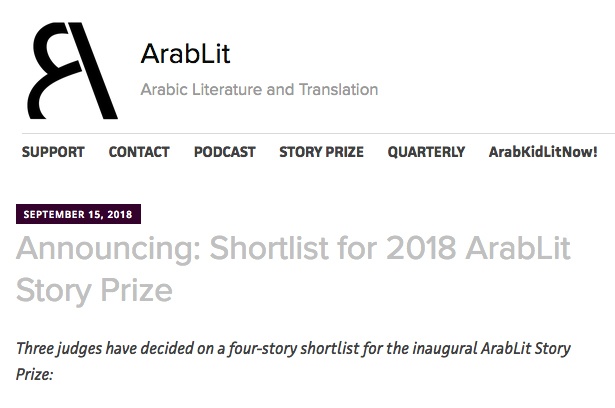 Rasha Abbas’s “How to Swim the Backstroke with a Shilka Missile,” translated by Fatima El-Kalay

All four entries were read out on SoundCloud.

Today the winner has finally been announced. It is none other than Muhammad Abdelnabi, for his entry, “Our Story,” translated by award-winning Robin Moger.

The Egyptian writer is the author of In The Spider’s Room, which was shortlisted for the IPAF (Hoopoe, 2018). Moger is the winner of the 2017 Saif Ghobash Banipal Prize for Arabic Literary Translation.

Click here to listen to Moger read the piece 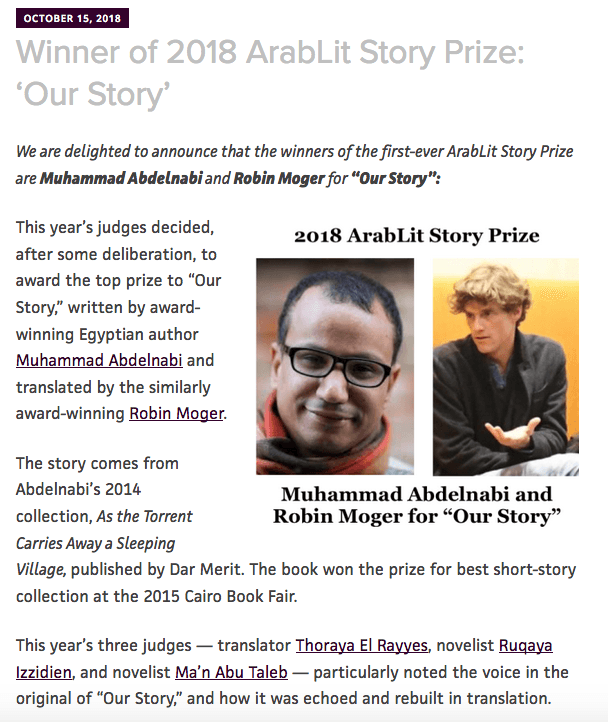 In her blog piece, Marcia Lynx Qualey points out how “[T]his year’s three judges—translator Thoraya El Rayyes, novelist Ruqaya Izzidien, and novelist Maan Abu Taleb—particularly noted the voice in the original of ‘Our Story,’ and how it was echoed and rebuilt in translation.”

Posted on 15/10/2018 in FICTION General, tagged as ArabLit Story Prize, In the Spider's Room, Muhammad Abdelnabi, Our Story, Robin Moger