In January of this year, when Omani author Jokha Alharthi’s novel Celestial Bodies, translated into English by Marilyn Booth, was longlisted for the 2019 Man Booker International Prize, the veteran translator told the committee, “I appreciate very much that this prize recognizes not only the power of the work in the language in which it was imagined and written, but also the importance of translation as creative writing and as responsibility, to readers and to the author of the original.”

Booth is an American academic, perhaps best known as a skillful translator of contemporary Arabic fiction, having translated more than a dozen novels, including Leaves of Narcissus by Somaya Ramadan (AUC Press, 2002); Disciples of Passion by Hoda Barakat (AUC Press, 2006); The Loved Ones by Alia Mamdouh (AUC Press, new edition paperback, 2008); The Open Door by Latifa al-Zayyat (AUC Press, 2000; Hoopoe, 2017); and No Road to Paradise by Hassan Daoud, winner of the Naguib Mahfouz Medal for Literature (Hoopoe, 2017).

Formerly professor of Islamic and Middle Eastern Studies at the University of Edinburgh, Booth remembers exactly how she got involved in the Celestial Bodies translation. “I knew Jokha . . . because she had been a doctoral student at Edinburgh, and I helped with the final stages of her thesis. She sent me her novel, I found it intriguing and a challenge, and I wanted to do it.”

“[Marilyn Booth’s] translation is precise and lyrical, weaving in the cadences of both poetry and everyday speech,” said the 2019 Man Booker judging chair Brettany Hughes during the award ceremony in London. “We felt we were getting access to ideas and thoughts and experiences you aren’t normally given in English,” she added.

Influential ArabLit blogger Marcia Lynx Qualey wrote that “one of the remarkable aspects of the English edition of al-Harthi’s Sayyidat al-qamar is its musicality, its joy on the page.” 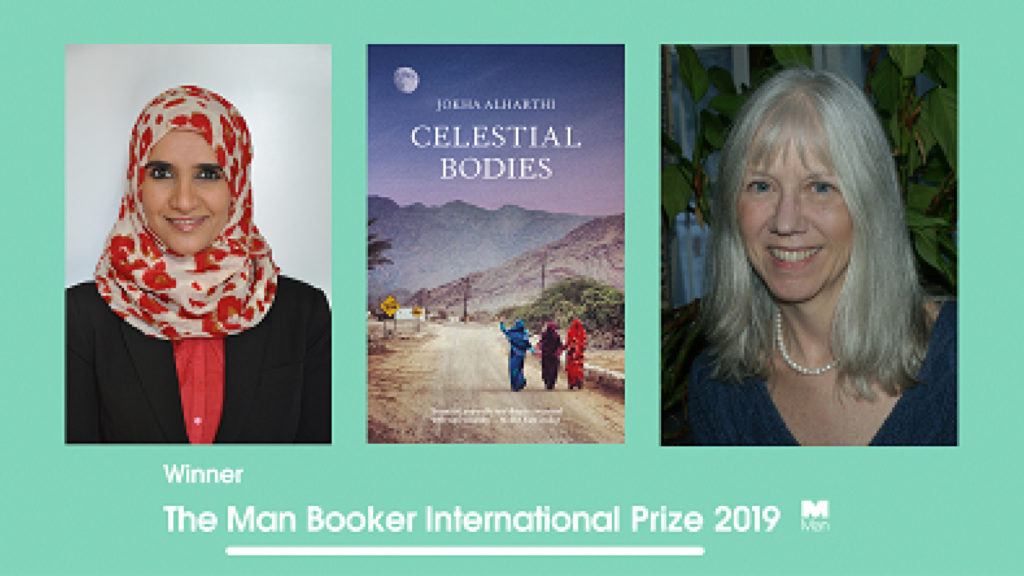 Celestial Bodies, published by the small Scottish literary press Sandstone, offers a glimpse into the village life of an Omani family and three sisters growing up at a pivotal time in Omani history, marred by slavery. Mayya marries into a rich family after a heartbreak, Asma weds out of duty, and Khawla waits for a man who has emigrated to Canada.

“I like very much that Jokha does not write for readers who do not know Oman: she does not try to explain things. That’s a challenge for the translator, as one has to meet the reader partway . . ,” said Booth in a previous interview for ArabLit.

As a translator, Booth views the Booker Prize as significant because it draws attention not only to Arabic fiction in general but also to lesser-known, budding literary hubs such as Oman. “Arabic fiction is thought of as a road map to the Arab world rather than first and foremost as art, as imaginative writing, pushing the boundaries of what can be thought and said.”

In a small Lebanese village a disillusioned imam, diagnosed with terminal cancer, must face his demo… 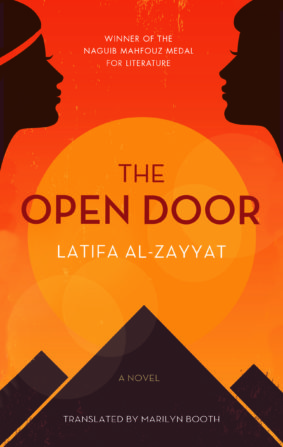 February 1946: Cairo is engulfed by demonstrations against the British. Layla’s older brother Mahmud…