Rana Haddad is the author of The Unexpected Love Objects of Dunya Noor, her first novel, set in Syria (shortlisted for the 2019 Polari First Book Prize).

Haddad grew up in Latakia in Syria, moved to the UK as a teenager, and read English Literature at Cambridge University. She has since worked as a journalist for the BBC, Channel 4, and other broadcasters, and has also published poetry. Today she lives in Athens. The Greek capital has been under strict corona lockdown for the past weeks because of the COVID-19 pandemic. Haddad describes—with humor and introspection—what this is like, and how she is coping, keeping busy, and working on a new novel. 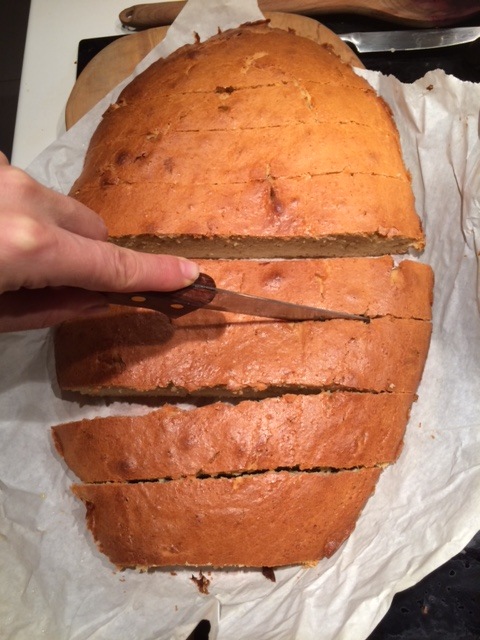 I have taken up gardening on my balcony. I also started to become more house proud. For the first time in my life I spring-cleaned the flat, and I am sweeping and cleaning more often. I think, somewhere in my subconscious, I am a repressed housewife. I am also making cakes once a week for a charity in Athens which distributes cakes to people all around the city, especially to people who are struggling but also those in hospitals. This reminds me of Marie Antoinette’s surreal quote: “Let them eat cake!” Despite her flippant, cruel words, she was pointing out the fact that cake cheers people up and lifts their spirits, even in circumstances when they can barely afford their basic daily bread.

I moved to my flat in Athens in early January. We didn’t have any plants at that point but as soon as the lockdown started I passed by a local flower shop, took the number from a piece of paper on the door, and called the owner to ask if he could bring me a selection of plants of his choice. He came the next morning on his moped, loaded with flowers and leafy plants, and a small plum tree. So now my balcony is a little more of a refuge, though I still have a long way to go. My ambition is to get a jasmine tree, a fig tree, and some roses, as well as some plants I’ve seen here and there but whose names I do not know.

I live in an urban part of Athens where I thought there were no local parks. We are banned from traveling to access nature or beaches. So I have taken to walking between the residential streets in my own neighborhood (while listening to Abd al-Halim Hafez’s Risala min taht al-ma’ (Letter from Underwater) and many songs by the Greek singer Charis Alexiou, who creates a perfect soundscape to accompany a walk in Athens . . . ). I focus my attention on the cherry trees in blossom, as well as the orange and lemon trees, and interesting vegetation which seems to grow out of all the balconies and pavements here. I think the residents of Athens are all very green-fingered, so although we live in a dense urban environment, there are plants everywhere, as well as wild street cats and birds roaming the streets, and more so nowadays than ever. But the cats, I must say, look forlorn and confused. They miss us humans the way we miss them. They have that look in their eyes which says: “Where are you all? What’s the matter with you? Have you all gone mad? I want attention!” But the residents of Athens’ neighborhoods are careful to still feed their local cat population by leaving them water and cat food in small recycled pottery bowls that one can find all around the city.

Every day when I want to walk or go shopping I must send a text to a government number and apply either for a B6 permit (Exercise) or B3 (Shopping). Very totalitarian and sci-fi, but the entire population took to it like ducks to water because if you don’t comply, the fine is 150 Euros and on some days, that same fine doubles (like during the Easter weekend and the Πρωτομαγιά (First of May) weekend).

The other thing that surprises me about Athens is that even though people live very close to each another, they don’t shout and scream the way people do in some other cities and the general vibe is very calm and quiet and homely. On my daily walks I smell the most enticing aromas of various dishes being prepared and I wonder who is cooking what for whom behind those drawn curtains and shutters.

After a week of strolling in my beautiful concrete-jungle neighborhood, I finally found an entrance to a park which led me to a pine forest I had no idea existed so close by, and as I walked further I found a mountain! I had seen that mountain at the end of various streets but every time I had tried to reach it there were always gates or fences blocking entry to those on foot so I was left with the impression that it was only accessible by car from another side. However now that I have so much time on my hands, I finally found an open gate where the path continues on and on, to the top!

I’m also using the time to try to discipline myself and settle into more of a routine with my second novel, which I’ve found hard to plug myself into as it’s got such a different world and tone from my first novel. This one is set in London during the last decade of the twentieth century but in a London that is slightly ‘parallel,’ so I use certain imaginary elements to enhance or express hidden themes in the city and in England in general. In this book I explore England, in the way I studied Syria in The Unexpected Love Objects of Dunya Noor, and I want to also explore love, but in a very different way than I did in Dunya, or, at least, I want to look at another aspect of it. The book is a mix of sci-fi, romance, and detective fiction, but also speculative philosophy, science, and fantasy. God knows if I can pull it off. I might be trying to bite off more than I can chew. And unfortunately, most of the time, I’d rather go for a walk or water the plants or make a cake or dream of being free again or ring a friend to talk about what’s going on! I and my closest friends have suspicious minds and cannot take everything we read in the newspapers or watch on television at face value, so it’s all very exciting to theorize about what is really happening and make plans about what we will do when we get our freedom back again!