Nektaria Anastasiadou is the 2019 winner of the Zografeios Agon, a Greek-language literary award founded in 19th-century Constantinople. She is the author of the novel A Recipe for Daphne (Hoopoe). She lives in Istanbul.

When did you first realize you wanted to be a writer and is being a writer a gift or a curse?

I always wanted to be a writer because I have always loved losing myself in the imaginary worlds of novels. For me, being a writer is neither a gift nor a curse. It is a vocation that requires absolute dedication, a great deal of work, and much patience. I feel blessed to have all three.

A Recipe for Daphne is your first novel. Where did the main idea for the book come from?

One day in 2010 or 2011, an elderly Rum* gentleman told me about a forgotten pastry called the Balkanik. He described it as a large éclair, but with differently flavored crèmes inside. Each crème symbolized a different Balkan people and their harmonious coexistence. Because the peaceful coexistence of peoples with different religions, cultures, and languages is something that fascinates me, I knew that I wanted to write about a pastry chef who would resurrect that old recipe. Thus, my character Kosmas was born.

At that time, I was renting an apartment in the historical street of Faik Paşa in the Çukurcuma neighborhood of Istanbul. One evening I was sitting in my cumba—a traditional bay window—and imagining how the street’s old buildings would have looked when they were built in the nineteenth century, or even half a century prior. I began writing about them in my notebook from the perspective of an old man who had lived all his life on that street, who had seen its changes over time. That old man became Fanis.

The pastry and the street came together into a story when I had a discussion with friends about the difficulty of finding a mate within a small community (the Rum minority of Istanbul is estimated at about two thousand people). I wanted to write about this challenge, so Fanis and Kosmas had to be on the lookout for a Rum wife. If she were already in Istanbul, they would have found her already because everyone knows everyone within a community of two thousand. Consequently, a woman would have to come from outside, but I didn’t want her to come from Greece because I don’t think that we should limit ourselves to the idea that only Greeks understand Rum culture. For that reason, I made Daphne American.

Fanis, a widower and retired antique dealer, is at the center of a group of Istanbul Rums who meet regularly for afternoon tea in Cihangir. When Fanis’s friend Gabriela brings her American niece to tea, Fanis is smitten but also unsettled because Daphne reminds him of the fiancée that he lost during the 1955 pogrom. Fanis’s friend Kosmas, a master pastry chef on the lookout for a good Rum wife, also falls for Daphne. She is intrigued by his search for a forgotten Ottoman recipe, but can she love him in return? Or will a family secret threaten their chances?

Are any of the characters inspired by a real person?

No. All of my characters, as well as the story itself, are pure fiction.

What is your favorite part of your novel?

That’s such a difficult question. I like the whole novel, but perhaps my personal favorites are the brief, introspective pauses like this one:

“Kosmas ordered a toasted cheese sandwich and settled down to watch the boats gliding between the Asian and European shores within the strait and across the mouth of the Sea of Marmara. Waves crashed against the quay and sprang up like fountains, leaving pools of saltwater on the rough cement. On the other side of the inland sea, the mountains of Anatolia rose into low gray clouds. Kosmas wondered, as he always did while watching Istanbul’s waters and the smooth movement of the ferries, why he still lived in the City of his isolation, where he didn’t seem to have the slightest chance of ever finding a Rum wife. Perhaps he should have left long ago for America, Canada, Australia, or Greece, like everybody else. But now he had his pâtisserie and an aging mother on his head. It was too late.

A waiter with a full tray of tea glasses made his way through the tables. Kosmas raised a finger. The man set a glass before him. The seagulls, which seemed to have more of a right to the City than anyone, uttered murderous cries when a hobby fisherman emptied a plastic bucket of fish heads onto the quay. Within minutes, nothing but a water-blood trail remained. As Kosmas watched the poor Sunday fishermen casting their lines into the gray Bosporus, he wished to God that he could be like Fanis, who knew the names of all the female cashiers at the local supermarket, never exited without saying hello to each, and sat in the tea garden like a pasha while women of all ages came to kiss his cheeks and forehead.”

How uninhibited did you feel while writing the book or were you often keeping the reader’s reaction in mind?

I don’t think that I thought so much about the reader’s reaction while writing because it was so difficult for me to write this story. I couldn’t think about reactions and write at the same time. During the review stage, readers pointed out things that Westerners might not understand, and later my editor at Hoopoe Nadine El-Hadi questioned things that an Arab reader might not understand. I was therefore able to clarify any remaining details that might be confusing to readers in various cultures. Like the double-headed eagle that was the emblem of Byzantium, the book looks both East and West. And now that it is finished, I certainly do think about readers’ reactions. I hope that they will like it.

Do you write better in summer, at a certain time of the day, in a certain place?

I don’t have a particular season or time of day during which I write better because I believe that writing is a desk job for which you must show up every morning, regardless of how you feel. I write wherever I am. But after months of writing only in my flat due to quarantines, I now enjoy writing in my favorite café. It’s much cooler than my flat and I can see an acacia tree from where I sit (we don’t have many trees in Istanbul, so this tree is my luxury). The owner brings my green tea and water without me having to say a word, and then I forget all about the real world for the rest of the day. It’s paradise.

How does Istanbul inspire your writing?

Istanbul is an endless source of material and inspiration. It’s impossible to live here and not have at least ten stories that you would like to write. In spoken Istanbul Greek, we refer to Istanbul as the Polis (City). For us, there is only one Polis, so we don’t need to specify which one. A novelist living in history’s preeminent city—with all its beauty and madness—can never lack inspiration.

* The word Rum comes from the Greek word Romios, which literally means ‘Roman.’ The citizens of what we call the Byzantine Empire called themselves Romans, not Byzantines, because they lived within the Eastern Roman Empire. The same term is used in Modern Turkey for the native population of Orthodox Christians. 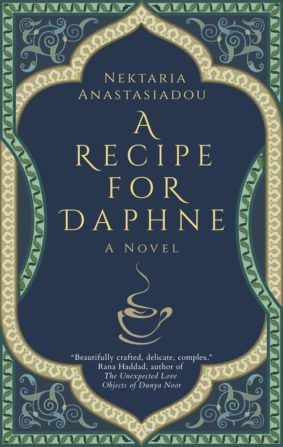