Earlier this month, Syrian novelist Rana Haddad, author of The Unexpected Love Objects of Dunya Noor (Hoopoe, 2018), had a lively and delightful Zoom conversation with Dr. Itzea Goikolea-Amiano of SOAS University of London about ‘How Love is a Revolution.’

The novel is a playful yet profound coming-of-age narrative about Dunya Noor, a curly-haired, anti-establishment, curious, rebellious, aspiring young photographer who does all the things a girl like her is not supposed to do and whose curious spirit and rebellious heart are pitted against her society’s expectations.

Here is how Haddad described her novel to her online viewers: “The novel is about the coming of age of a young girl who is always doing the opposite of what she is supposed to do. After I wrote the story I realized the reason she is doing the opposite is because she follows her heart. I am talking about Syria but I think this same process happens in every society because even if you are not living in a totalitarian society or in a dictatorship, every culture—the word “culture” has the word “cult” in it. I think every culture is like a cult. . . . Some children rebel a bit and then conform but some don’t, they can’t. Dunya is one of these children and as she gets older, regardless of the kind of punishment or disapproval or anything, she always does [what she wants]. And the things that she does are never terrible, they are just not what you are supposed to do, and she carries on doing that until her early twenties and then you see the consequences of following your heart. . .  And also who says what she thinks, especially in Syria that could be very dangerous. She gets taken out of the country at thirteen for her own safety. But it is written in a satirical way.”

The online event was part of the Scheherezade Cultural Events series, organised by MULOSIGE-SOAS and N4 Library (Islington). HERE IS THE RECORDING OF THE EVENT! 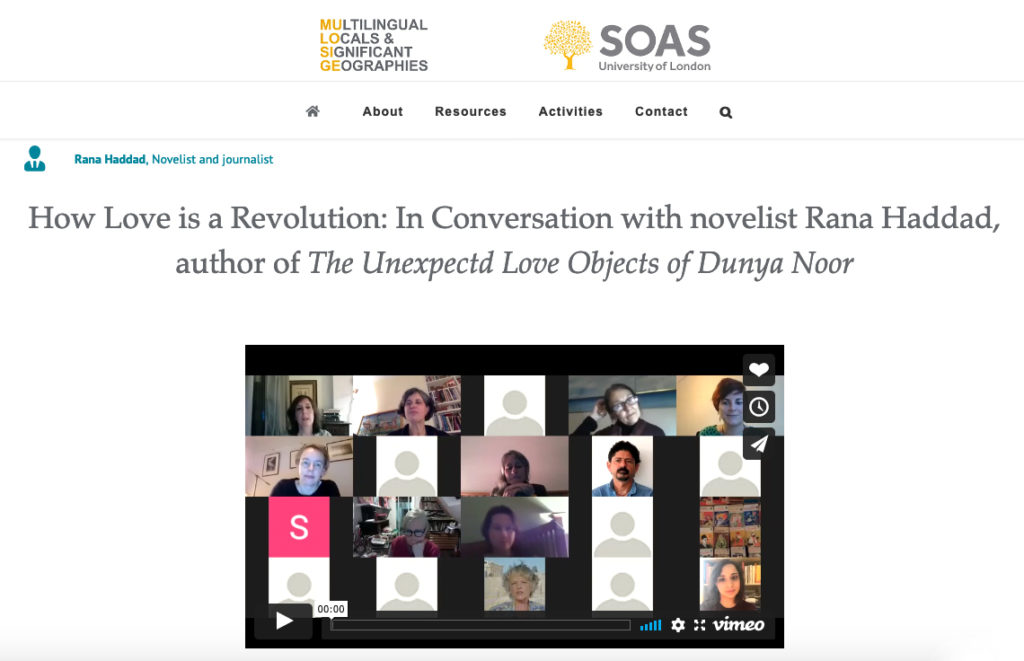