On January 12, the Banipal Trust announced that the late Humphrey Davies, translator of The Men Who Swallowed the Sun by the award-winning novelist Hamdi Abu Golayyel, published by Hoopoe in 2022, is one of the two winners chosen for the 2022 Saif Ghobash Banipal Prize for Arabic Literary Translation. The joint winner is Robin Moger for his translation of Slipping by Mohamed Kheir, published by Two Lines Press.

“A joint award seemed the best way to honor two extremely strong novels which each distinguished themselves in different ways,” wrote this year’s Banipal judges in their report. They commended Davies’s translation to English for “the impressive skill and creativity involved in tackling such a dense and complex text written in non-standard Arabic.”

The Men Who Swallowed the Sun follows two Bedouin men from Egypt’s Western Desert who seek to escape poverty through different routes. One—the intellectual, terminally self-doubting, and avowedly autobiographical Hamdi—gets no further than southern Libya’s oasis of Sabha, while his cousin—the dashing, irrepressible Phantom Raider—makes it to the fleshpots of Milan.

“It will be the third time that Humphrey [Davies] has won the prize, having won the inaugural 2006 prize and then the 2010 prize, both for novels by Elias Khoury. We are very pleased to be able to honor Humphrey’s talents once more,” said Margaret Obank, Publisher of Banipal Publishing, and Trustee, Banipal Trust for Arab Literature. Davies, who passed away in late 2021, translated some thirty book-length works from Arabic, including The Yacoubian Building by Alaa Al Aswany.

Both The Men Who Swallowed the Sun and Slipping were published in Arabic in 2018. The two novels “represent exciting new directions in Arabic literature,” added the Banipal judges in their official statement, “both through their divergencies and their surprising synergies, unearthing forgotten, baffling, and painfully absurd histories, broaching the topic of illegal migration, and doing so through narrators who upset, challenge, and force their reader to see the world anew.”

An in-person award ceremony will be held at the British Library in London on 8 February, hosted by the Society of Authors, who administer the Prize on behalf of the Banipal Trust.

The Saif Ghobash Banipal Prize for Arabic Literary Translation is an annual award of £3,000, made to the translator(s) of a published translation in English of a full-length imaginative and creative Arabic work of literary merit published after, or during, the year 1967 and first published in English translation in the year prior to the award. The Prize aims to raise the profile of contemporary Arabic literature as well as honoring the important work of individual translators in bringing the work of established and emerging Arab writers to the attention of the wider world. 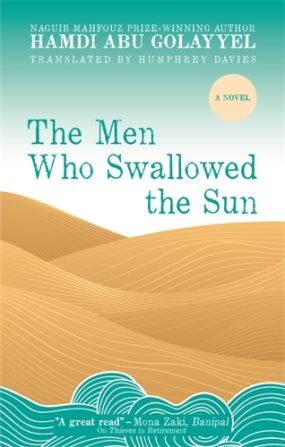