The Disappearance of Mr. Nobody 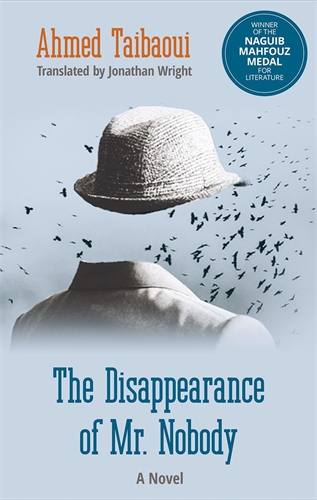 A “spare, well-crafted and compelling” (Samah Selim) novel in which a man in Algiers disappears without trace and the detective in search of him finds more than he expected, winner of the Naguib Mahfouz Medal for Literature

In Rouiba, a nondescript suburb of Algiers, an unnamed man with a troubled past escapes his everyday life to find himself caring for an old man with dementia. When the man dies, the carer disappears into thin air. A police detective is assigned to investigate the circumstances of the old man’s demise and to track down the caretaker, only to find that the unnamed man cannot be identified—that there is no trace of Mr. Nobody. The officer’s search leads him to those whose paths once crossed Mr. Nobody’s. In each of them he finds a reflection of the man he is looking for.

A raw, lyrical portrait of life on the margins in contemporary Algiers, this haunting noir captures an underworld of police informers, shady imams, bootleg beer traders, and grave robbers, and reverberates with echoes of Algeria’s violent past.

"In this spare, well-crafted and compelling novel, Taibaoui plays with the poetics of noir fiction to offer a bleak and haunting critique of the postcolonial Arab state and its mythologies."—Samah Selim, Rutgers University

"From its somber but intense style, vivid characters emerge. This is a novel of unpleasant truths."—Humphrey Davies

"The Mr. Nobody in Taibaoui's outstanding novel takes off his face and disappears revealing a patriarchal system that derives its existence from a web of power relations that have no place for him or us."—Shereen Aboulnaga, Cairo University

"With satirical language—concise and poetic at the same time—and its suspenseful construction artistically woven with elements of crime fiction, 'The Disappearance of Mr. Nobody' compels readers to its last page."—Heba El-Sharif

"A powerful narration that does not overshadow the intelligence and creativity of its writer."—Thaer A. Deeb

Ahmed Taibaoui is a professor at the Faculty of Economics, Business, and Management Sciences at the University of Bouira in Algeria. He was awarded the Tayeb Salih International Prize for Written Creativity (2014) for his novel Mawt na‘im (Death of a Sleeper), as well as the President of the Republic Award for Young Innovators (2011) for his novel al-Maqam al-‘ali (The High Eminence). Winner of the Naguib Mahfouz Prize for Literature, The Disappearance of Mr. Nobody is Taibaoui's fourth novel and his English language debut. He lives in Algiers.

Jonathan Wright is a translator and former Reuters journalist. His previous translations from the Arabic include Khaled Al Khamissi’s Taxi, Youssef Ziedan’s Azazeel (Winner of the IPAF, 2009), Saud Alsanousi’s The Bamboo Stalk (Winner of the IPAF, 2013), Hammour Ziada’s The Longing of the Dervish (Winner of the Naguib Mahfouz Prize), Ahmed Saadawi’s Frankenstein in Baghdad (shortlisted for the Man Booker International), Mazen Maarouf ’s Jokes for the Gunmen (shortlisted for the Man Booker International), and Hassan Blasim’s God 99, The Madman of Freedom Square and The Iraqi Christ (winner of the 2014 Independent Foreign Fiction Prize). He lives in London.